The same OTUs are not merged

Hi,
I’ve followed the pipeline “MiSeq SOP” from Mothur Wiki and at the end I’ve obtained such OTUs:

Why OTUs 1-6 are not merged?
Did I miss some step? 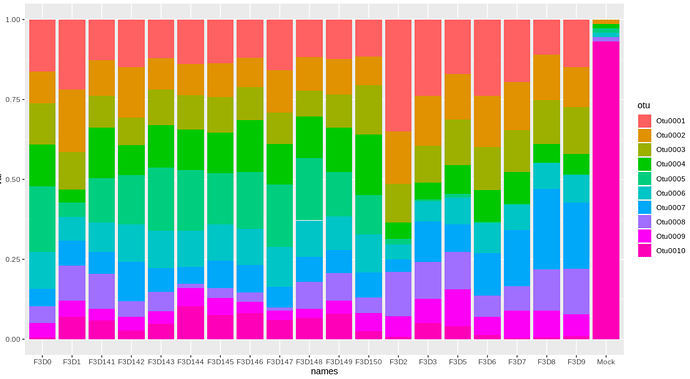 are those first 6 OTUs identical or are they 6 different OTUs that are just classified as belonging to the same genus? My guess is the second option, meaning that you have 6 very similar OTUs (either through small sequencing errors or natural genetic diversity within the taxon) that are still different enough from each other to land outside of the settings you chose for OTU clustering and so became different OTUs while still being identified as the same taxon. You can check this by getting representative sequences for each OTU (“get.oturep”) and compare those from the same taxon (here your OTUs 1-6). If they are 100% identical, then there is of course something wrong with the analysis.
Otherwise, if you want to bin everything together that shares the same taxon then you should have a look at the phylotype analysis or use the output from the “YourFileName.tax.summary” file after the “classify.seqs” command.

Good luck & all the best,

Really thank for your answer.
Indeed they were sequences from the same “genus” but different strains.
There’s a lot of files and info for new users and everything is a bit confusing.

In the silva.nr_v132.tax file there are infos:

the strain info is missed. To keep it, should I modify the tax info manually and add it to the last “taxonomy” position? For example like this:

mothur does not merge OTUs based on taxa id. If you wanted to merge based on taxa id use the phylotype method rather than clustering OTUs. I’m firmly in the OTU camp, I think OTUs give you much more biologically meaningful groupings because names of species tell you a lot about who studies something and less about whether 2 species (or genera) are really similar or different.